Queen Elizabeth II will be celebrating her Sapphire Jubilee this upcoming Monday to mark 65 years on the British throne. The Queen will be the first British monarch to reach a sapphire jubilee; already becoming the United Kingdom’s longest reigning monarch in 2015. Few British monarchs have surpassed their golden jubilee celebration, which marks 50 years.

A famed portrait of the queen taken by renowned photographer David Bailey was reissued to honor the anniversary. In the photograph she wears a suite of sapphire jewelry gifted by her father King George VI as a wedding present in 1947. The set includes a necklace featuring 16 blue sapphires surrounded by diamonds with drop earrings to match. The Queen also commissioned a matching tiara and bracelet in 1963 to complete the suite.

With this inspiration at the forefront, Knox Jewelers would be overjoyed to assist you in custom creating sapphire jewelry fit for a queen. We have several loose blue sapphires available, in many sizes and shapes, just waiting to be fit into a beautiful custom jewelry piece. Draw inspiration from the royal suite and pair dazzling diamond halos framing your perfect blue sapphire for a regal look. We have several sapphire halo designs featured on our website that can be altered to your specification, or we could start anew with a sketch and bring your perfect sapphire jewelry to life. Contact us today to get started on your one-of-a-kind royal sapphire jewelry. You are sure to feel like a queen with deep blue sapphires set into your perfect custom setting! 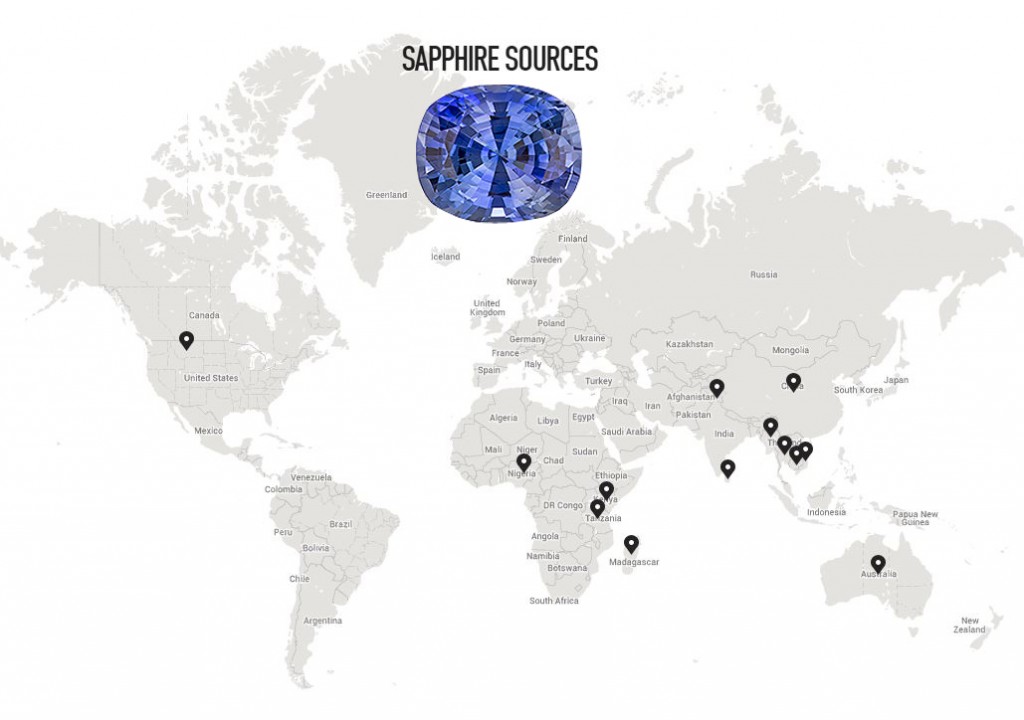 United States – The state of Montana boasts the Yogo Clutch area which is famous for sapphire production.

Nigeria – Darker toned sapphires are often found in Nigeria due to the presence of magmatic rocks.

Kenya – Kenya is not limited to one color of sapphire, several hues are found here including rarer star sapphires.

Tanzania – a large variety of colored sapphires are found in the Umba River Valley in Tanzania.

Madagascar – Madagascar has been leading production of sapphires since the start of the twenty-first century.

Kashmir – Most of the sapphire mining in Kashmir happened over a century ago, but the gemstones found were so appealing they are still sought after.

Sri Lanka – A great deal of sapphire mining is still done by hand in Sri Lanka.

China – Many colors of sapphires are found in China including very dark blue.

Myanmar – Myanmar is famous for its deep red rubies but also mined in Mogok are royal blue sapphires.

Thailand – A great many sapphires and rubies are cut in Thailand.

Cambodia – Sapphires are mined in both pits and rivers near the Pailin area of Cambodia.

Vietnam – Though production has been irregular, Vietnam is well known for their beautiful sapphires and rubies.

Australia – Very dark blue and yellow are the most popular sapphire hues found in Australia.

If you are the fortunate enough to have a special event, such as a birthday or anniversary, coupled to the month of September, let us at Knox Jewelers help you create a custom one-of-a-kind piece featuring a legendary sapphire. Blue sapphires throughout history have symbolized royalty and faithfulness. Nobility have often chosen royal blue sapphire to embellish their wardrobes. Recent discoveries of the gemstone in fancy colors has brought about new options for the couple wishing for a center stone with a unique color but still carrying the romance and history of a sapphire. Sapphires are now available in a rainbow of colors including green, yellow, pink,  purple and colorless. Any one of our custom designs can be altered to hold this chromatic birthstone. The possibility are endless with a durable gemstone naturally mined in so many hues. A Knox Jewelers custom created piece, featuring a beautiful blue or fancy colored sapphires is the perfect way to celebrate any occasion falling within the month. Contact us today and let’s get started. We can always search our cutters’ inventory for your perfect gemstone, or we have a selection of incredible sapphires in a variety of sizes and cuts already available!

Sapphires have been a favored selection for engagement ring for many centuries, and up until the twentieth century more sapphires graced the fingers of the recently engaged than diamonds. In modern times the most sought after center stone is a diamond, and it has become a standard request at Knox Jewelers for an engagement ring. However, a growing percentage of couples are opting to include rich colored sapphires to their custom created rings.

Throughout the ages, sapphires have come to represent faithfulness and loyalty, hence their wide use in bridal jewelry. Recent events in history have also linked sapphires to the ideals of romance and royalty.

Apart from their chromatic allure, sapphire is also a practical choice for jewelry worn on a daily basis, like an engagement ring or wedding band. Corundum, the mineral name for sapphire, is ranked 9 on the Mohs Scale, and is hard enough to withstand everyday wear and tear. This being said, it is not indestructible.

With our custom created engagement rings and wedding bands the possibilities are endless. Customizing your engagement ring with the inclusion of sapphires will make it a truly personalize, one-of-a-kind piece. Listed below are just some of the ways colored sapphires could be featured in your favorite ring settings.

Choose a rich hued sapphire in your preferred size and shape as the central focus in any of our custom created rings. This unique center stone will offer a bold look.

Sapphire naturally occurs in a rainbow of intense hues. Take a modern stance and select your favorite fancy colored sapphire to complete any of our custom designs. 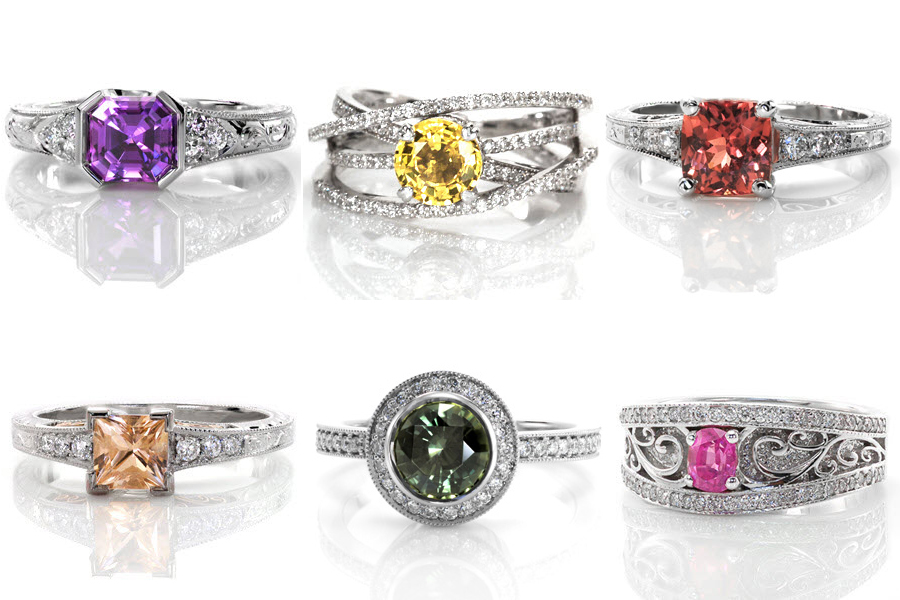 Get the best of both worlds with a custom engagement ring featuring a diamond center stone framed by dazzling sapphire accents.

Contact Knox Jewelers today and let us help you select the perfect sapphires to complete the ring of your dreams. Every sapphire is unique, and we can search for any shape, size or hue you have in mind. Make your custom engagement ring a truly one-of-a-kind creation with the addition of special colored gemstones.

Our new favorite custom created engagement ring features a trio of striking blue lab created round sapphires woven amidst a band of micro pavé set diamonds. This ring is crafted in 14 karat white gold. The bright white metal adds a striking contrast against the vivid blue sapphires. Its micro pavé diamond band winds seamlessly around the three round cut sapphires creating a unique interlacing triple halo design. Each sapphire is set within four prong inside their diamond halos. This braided design can be recreated to accommodate any type, shape, or size center stones. Contact Knox Jewelers today to custom tailor this design to your preferred precious metal and central gemstone selection to create your own one-of-a-kind engagement ring! 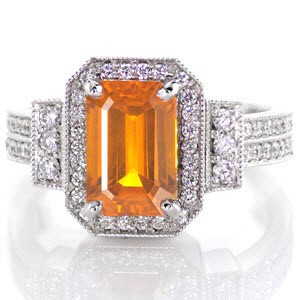 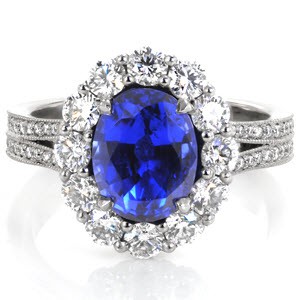 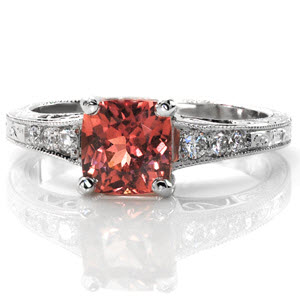 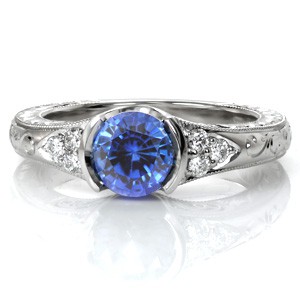 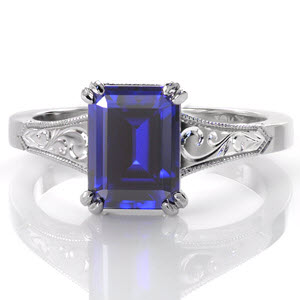 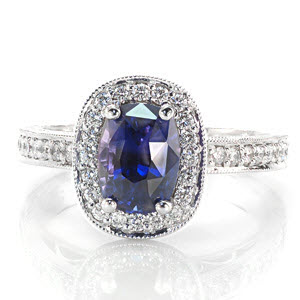